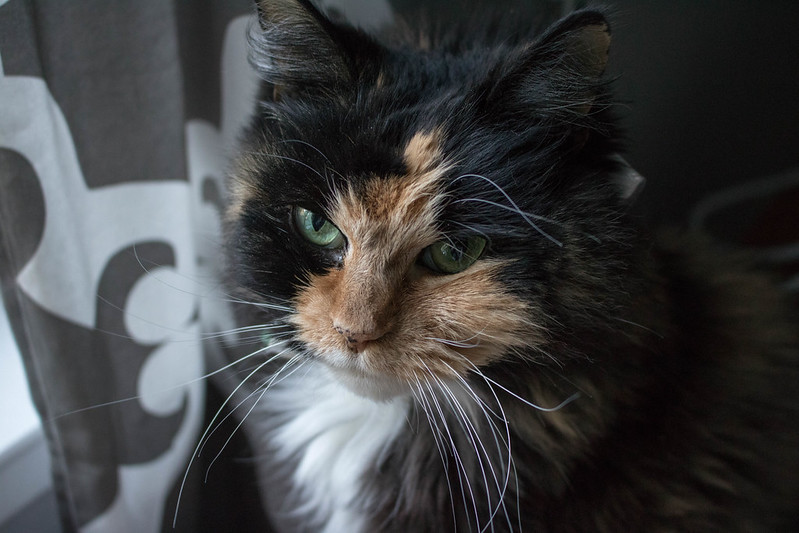 My nine year-old cat Bella has been the focus in our lives since the beginning of August. In July we started noticing a drop in energy as well as weight, and by the end of the month she was vomiting bile on a daily basis.

Worried, I scheduled to bring her into the vet on the same day as Mr. Big’s checkup. The doctor examined her, noting that she had lost 4lbs since her last exam, which is considered dramatic. Based on what I’ve observed and what he was able to see, he said it might be kidney related but wouldn’t know for sure until he ran a blood test and urine sample. They gave her an IV of fluids since she was dehydrated and sent her home.

The doctor wanted me to seperate her from the rest of the animals and monitor her over the weekend and he’d get back to me with the results on Monday. I kept Bella in my office room with her own litterbox and food/water, and I was able to observe her not eating and barely drinking. 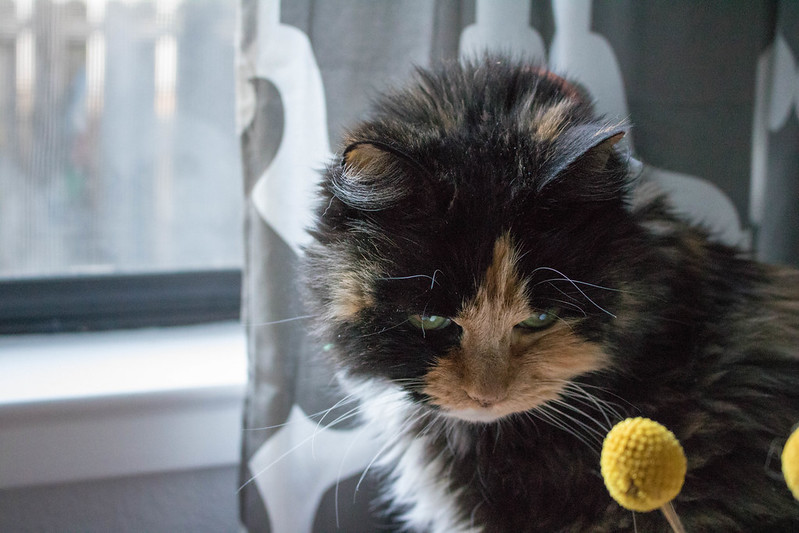 Monday morning the doctor called me with the results: something was happening with her liver. There was no way to know what specifically it was without an ultrasound and/or biopsy. His ultrasound tech travels and wouldn’t be available till Friday, and he felt Bella’s condition was too serious to wait that long. We needed to get her down to the emergency clinic as soon as possible.

I called the clinic to schedule an appointment and the soonest they could get her in would have been Wednesday morning unless I brought her in on an emergency basis. I fell stuck, not knowing what to do. I called my vet back and asked the doctor what I should do – he encouraged me to bring her in as an emergency. That way they could keep her stable until the ultrasound.

After work (which I had to stay late at to meet a deadline), Joshua and I headed to the 24 hour emergency clinic about an hour away where we waited almost two hours to be seen only to find out we went to the wrong 24 hour clinic. Once we got to the correct clinic we were able to leave her there so they could keep her comfortable until her ultrasound.

Tuesday morning she had her ultrasound, and it was confirmed that she had feline hepatic lipidosis also known as feline fatty liver disease. This is a disease that occurs when cats do not eat for awhile. Their body starts to metabolize their fat for nutrients rather than using nutrients from food. As a result, the fatty acids build up in the liver and cause liver dysfunction.

This disease can be brought on by stress or by another underlying disease. I had the choice of treating it as fatty liver disease or doing biopsies to see if it was something more serious such as cancer. I opted to treat it as fatty liver and go from there. 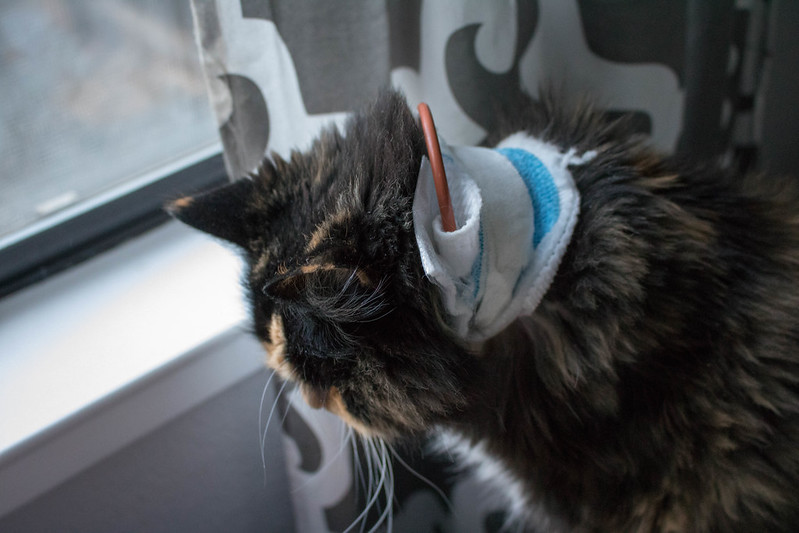 The first step in treatment was to provide nutritional support. Since she wasn’t eating on her own she had to have a feeding tube put in her esophagus. The next couple of days they increased her feedings and monitored her to make sure she wasn’t having any complications.

Friday night she was diagnosed with anemia with the cause most likely being her liver disease. They were going to continue monitoring her blood levels but warned me that if they didn’t improve she would possibly need a blood transfusion. Luckily it didn’t come down to that, so we were given the green light to bring her home on Sunday.

Sunday afternoon (the 8th) we got to see our Bella for the first time in almost a week. We met with the specialist and discussed her home care instructions. We would have to feed her three times a day via feeding tube as well as administer medication. She would have to continue to be seperated from the other animals as well as being confined so she wouldn’t risk damaging her feeding tube. We were also told to continue offering her small amounts of her normal food in order to get her eating on her own again. 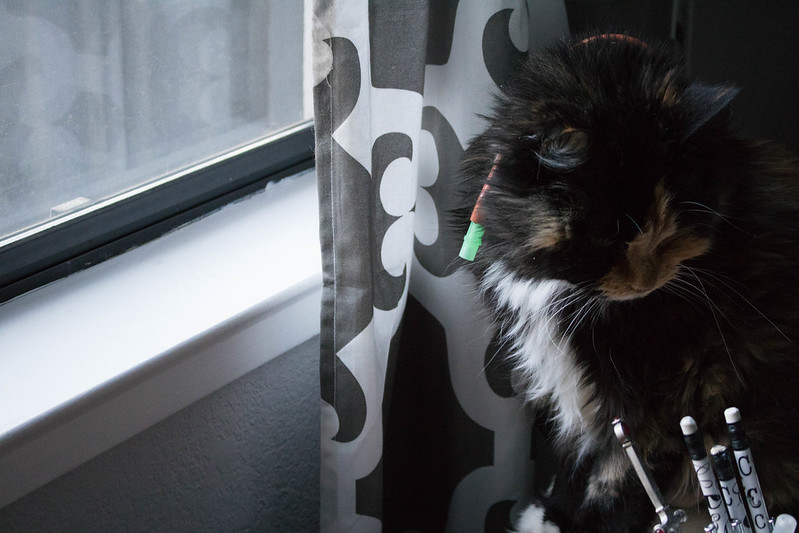 The first couple of days were pretty rough. She had difficulty keeping her food down, which I think had to do with the fact she’s not used to eating that much. She’s never had a huge appetite to begin with so going from that to not eating at all to being force fed high calorie food three times a day was tough.

She also refused to eat any of her normal food despite showing signs of hunger. It was a bit discouraging because before all this happen I switched all the animals over from highly processed kibble to more natural kibble. While all the other animals love it (especially the dogs when I put some coconut oil on top), Bella is not having it. In fact, it’s quite possible the food switch is what started this whole thing.

Between taking her food out of the fridge and letting it warm (couldn’t use a microwave), actually feeding her, and giving her meds/water, the whole process takes about an hour when all is said and done. We’ve had to adjust our schedules to make it happen, and we’ve definitely lost some sleep, but we’ve finally settled into a routine. She definitely enjoys sitting in my lap while I feed her and have my morning cup of coffee. 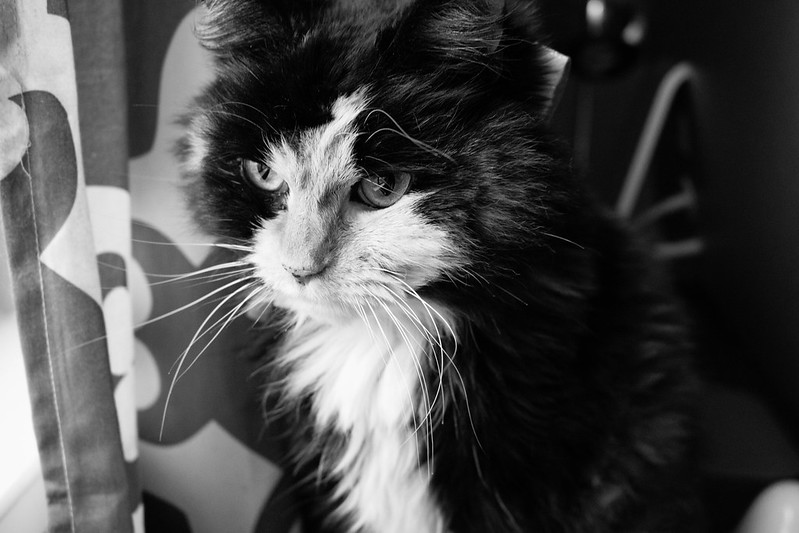 A few days prior I saw her energy start to come back, so that was very promising. And by not giving her the full dose of food on one of her feedings allowed her to keep her food down. By the time her first week with us came to close I was seeing slight improvement.

This past Monday (17th) she had her first checkup since being home. They did a physical exam as well as blood tests. I told the doctor about her not showing interest in her food despite being obviously hungry, and he said sometimes cats develop an aversion to certain foods and there’s no going back. He suggested I get a couple different brands of food and see which ones she goes for.

Aside from that, Bella is healing. It’s a slow process, but she’s made tremendous amounts of progress in a short amount of time. He called me later in the evening to discuss the lab results. Her anemia is gone and her liver levels are not 100% back to normal but are on their way there. 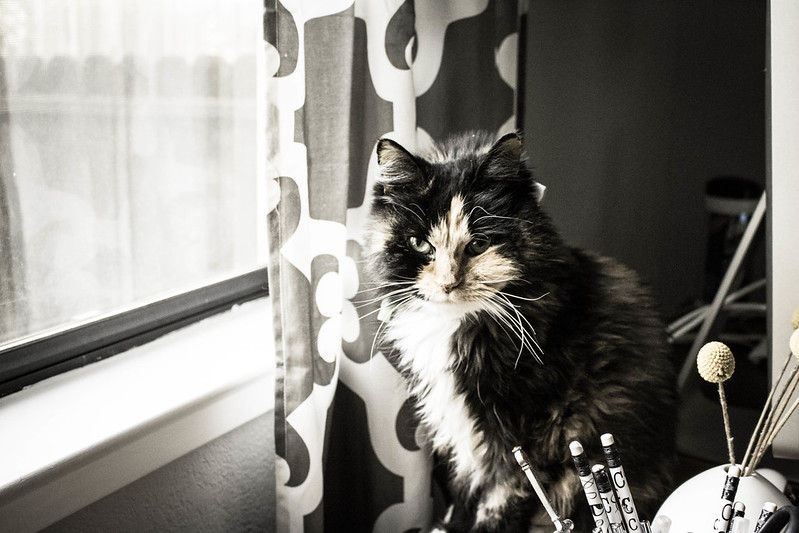 My sister picked up a couple cans of different brands of cat food to see if she’ll eat on her own, and so far she has, even though it has been in small doses. Her energy is going up daily, and if all goes well we’ll hopefully get the feeding tube removed at her next checkup in two to three weeks.

Oh my goodness. This is so sad. I’m glad she is improving. You are taking such great care of her!! I really hope she gets back to normal soon and can be with the other animals soon. Poor Bella.