If you haven’t seen it already, LovelyGeek.net is finally live! 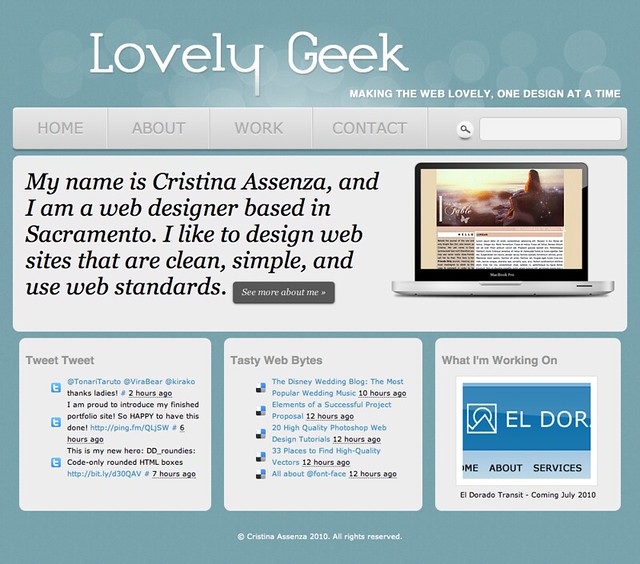 I am so relieved to have this up. It’s one of those projects that I’ve been working on a for a long time. My next big project (aside from the one I am working on for July) is to get my wedding web site up. I’ve got a couple ideas floating around, now it’s time to do some serious brainstorming! Not to mention I have a ton of other wedding stuff to do aside from the web site!

So Mother’s Day weekend was pretty fun. I think my sis and I helped out a lot because both my grandma and mom have been going through so much with my grandpa being in and out of the hospital. Dani and I came down early Saturday morning and spent some time talking to Morfar. Mom and I left the house so we could catch out 11:40am ferry into San Francisco. It didn’t take her long to figure out that we were going to Bliss Spa. While she had a 75min massage I treated myself to a mani/pedi, which was awesome because they always have Sex & the City playing at the nail stations. We had an hour before our ferry left so we went around the corner to check out SFMOMA’s gift shop.

My mom kept talking about how she wanted to go do something that evening, especially since Dani didn’t get to join us for the spa (when I planned the spa my grandpa was still in the hospital). Because the ferry goes right by it, my mom decided she wanted to go to The Melting Pot. I used the OpenTable app to get us a reservation. We had the Flaming Turtle dessert fondue plus my mom and I got dessert drinks. After finishing up the chocolate, my sis and I decided we wanted some cheese fondue, so we got the Cheddar Cheese fondue, which was delicious!

The next morning, my dad showed up as a nice surprise for my grandparents. All of us helped make a delicious breakfast of whole-wheat pancakes, fruit and scrambled eggs with chopped bell peppers and cheddar cheese. My dad set my grandparents up with a multi-handset phone system so they can have phones in the bedroom and downstairs, in case of an emergency. Later that morning my sis and I took off so we could get some last minute groceries for the lunch I was going to cook plus some cupcakes. Dani helped me cook Spiced Chicken Cacciatore for lunch, and then we presented my mom and grandma with special Mother’s Day cupcakes from Teacake Bake Shop. We gave the cupcake with the heart on it to my grandpa, hehe. My mom was planning on coming home yesterday, but Wednesday night my grandpa had chest pains again causing him to go back to the hospital. The good news is this wasn’t a heart attack, but they’re currently running tests to see what’s going on. The nice part is when he does come home, he has a brand spanking new bed to sleep in as my grandparents finally replaced their 50 year mattress!