With all these before photos you might be wondering what the plan is for the after. Joshua and I started working on a to-do list shortly after we went into escrow. Some stuff is getting tackled before we move in, others are going to be tackled after the sale of our other house when there’s more moolah in the bank.

I’ll go in depth room-by-room in future posts, but here’s some of the big things we’re tackling.

The number one item that needs to be complete before we move in is painting. I know there’s arguments over whether or not you should live in your space first before you paint, but we’ve lived in enough places to know our color scheme and what we want.

Not to mention, the house we lost before this one had the exact color scheme we were going for, so we already know what to expect. Plus it’s way cheaper (and easier) to get everything painted before we move in. And we’re setting a foundation that will make it much easier should we want to change colors down the road.

Oh and did I mention we’ve hired painters? I don’t know if it’s age or the season of life we’re in, but I so don’t want to paint anymore. Maybe smaller projects down the road, but I definitely do not want to do a whole house. Besides there’s wallpaper that has to be removed, and I am not about that. 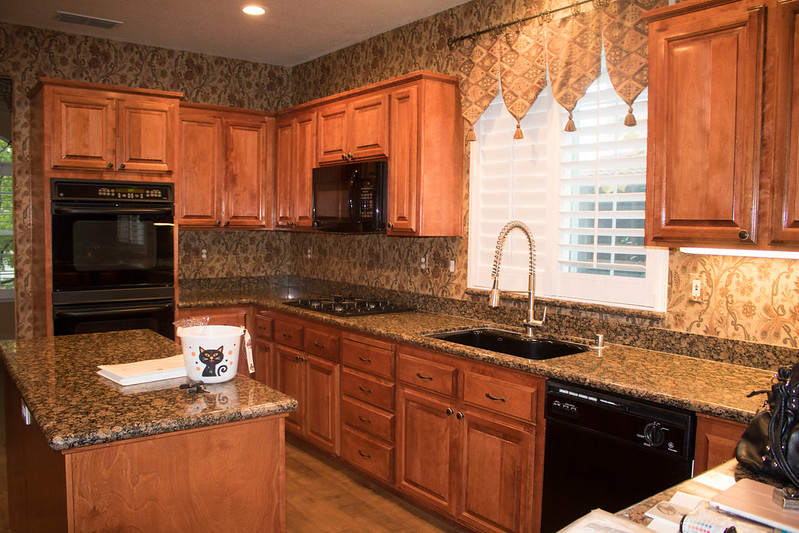 We found our painter via Porch.com which was recommended to us by Lowe’s. They started yesterday and should be done in a week. They managed to get all the wallpaper off in the kitchen, and it already looks better!

Anyone that knows us (or me at least, hehe) knows that the current decor is not our style. The current light fixtures are part of that decor and are all gonna go. 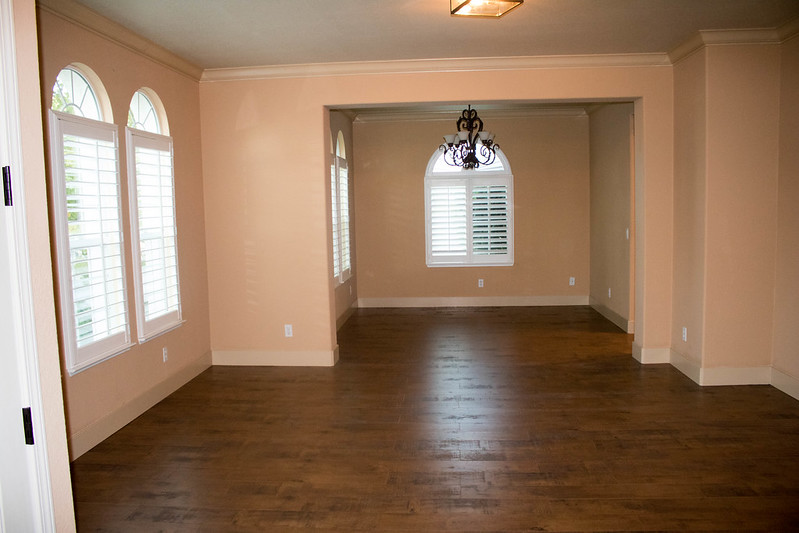 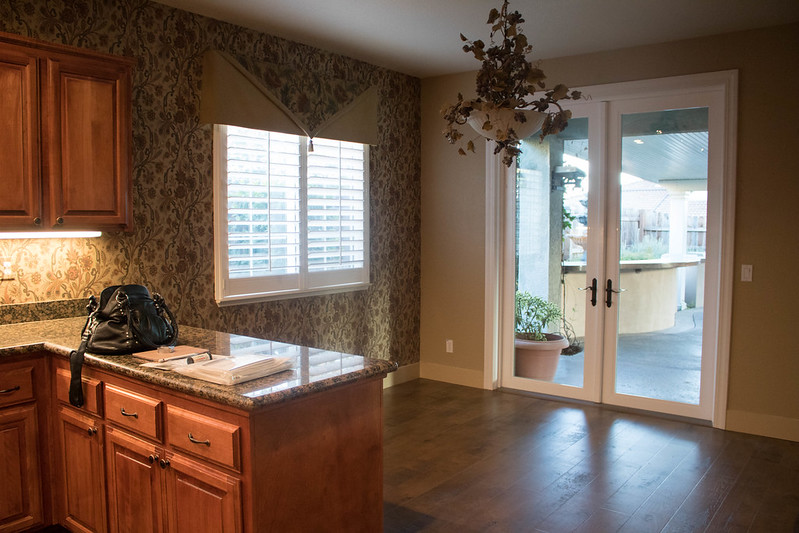 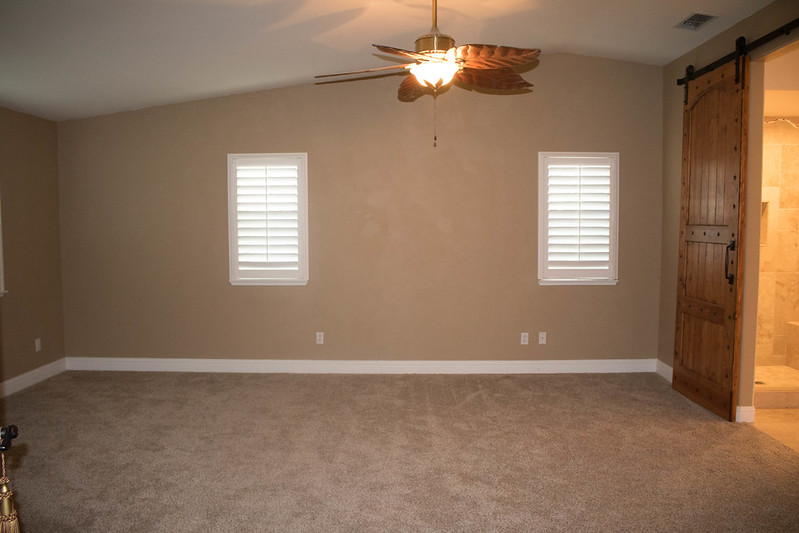 What’s nice about the new house is they are set up for ceiling fans, not to mention there are light fixtures in the bedrooms (YAY), something our current house lacks.

We already plan on bringing over the George Nelson to the new dining room, and I’m contemplating getting a small bubble pendant for the entry. Any room that has a ceiling fan is going to get a much nicer, more modern one. Bathroom fixtures will get replaced over time.

We may not have children (yet, Lord willing), but we do have fur-babies! The idea of the dogs being near the pool makes me SUPER nervous, especially since Tucker jumped in the pool when we brought the dogs over the other night. If Mr. Big were to accidentally fall in it would be the end of him, so we definitely need a safety fence. 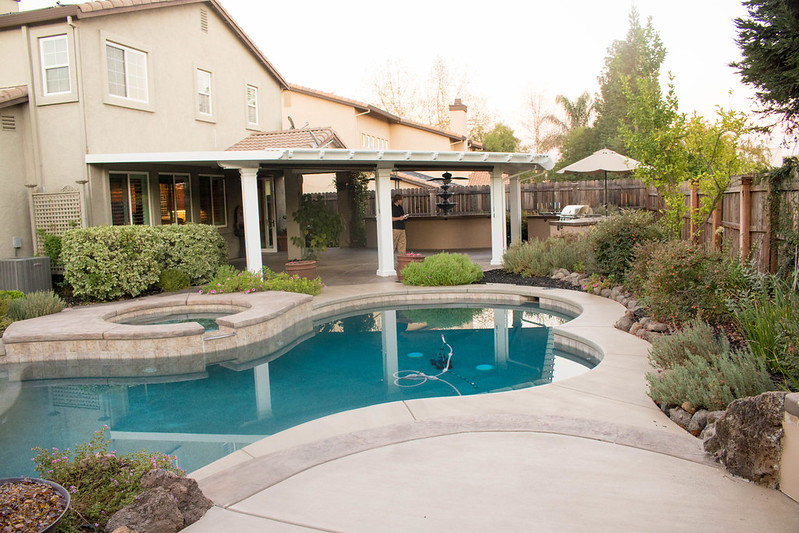 I originally wanted to go with a glass fence, but we were advised against it because it can cause fires (think of a magnifying glass on a blade of grass). Instead we’re going with a mesh fence. Safety before aesthetics, I’m afraid.

Lifeguard On Duty will be installing our pool fence next week. They came recommended by our pool inspector.

Over the past year or so we’ve been transforming our current home into more of a smart home thanks to the Nest, Philips Hue, Lutron, and other HomeKit friendly devices. We definitely plan to continue and improve that in the new place. These are some of the items on our list to integrate.

Pair that with the network overhaul Joshua plans to do plus replacing all the outlets/switches, we’re gonna have one heck of a tech home. 🤓

Love the idea of making your home tech friendly. Is there anything you’ve installed in your old home that you can bring to the new home? Or do you just leave it all behind?
I think it’s so smart to hire painters. You both have full time jobs and are so busy, so I bet it is nice not to have to worry about painting a whole house. Ain’t nobody got time for that.

Everything that we want to bring we’ll bring otherwise we’ll either leave it behind or try to sell it. For example we plan on leaving the Nest thermostat only because we want to try something different in our new home. But we’re bringing all the Hue bulbs and the wireless Lutron dimmer.