It’s our anniversary tomorrow, so today I’m sharing the story of how we met – 11 years ago!

Joshua and I were 17 years old when we met. Both of us were in our senior years of high school at our respective schools – I was a Union Mine Diamondback and he was a rival Ponderosa Bruin. I don’t really consider us “high school sweethearts” since we both went to different schools and high school was just about over.

Short story? We met at McDonald’s. The end.

Just kidding! But seriously, that’s where we met! It was our after school job. I was already working there for a couple of weeks when Joshua started working there. I later found out that he had worked there before and was back again because he recently acquired a car – his lovely 1985 Mercedes-Benz 300TD wagon which we still have to this very day – and needed money to fix it. 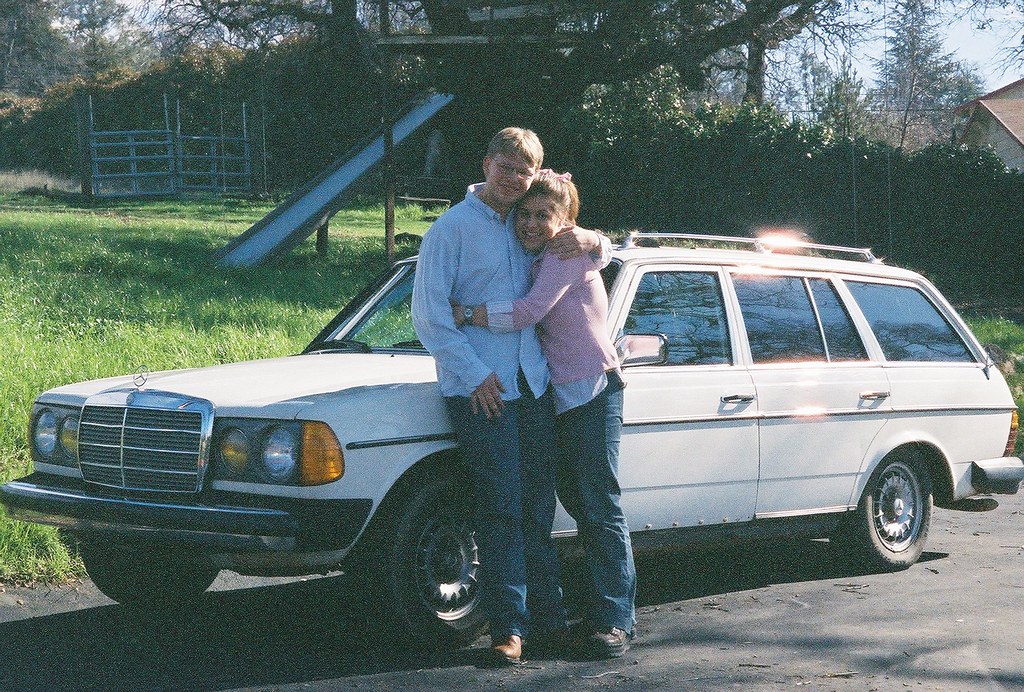 You know they say these kind of things happen when you least expect it? Yeah, they’re right (whoever “they” are). I had absolutely NO idea that when I came into work that day I was going to meet my future husband. When I think back on how it all happened it seems like such a cliche scene from a movie, but this is really how it all went down.

That day I was scheduled to work at 5pm. I was running late because beforehand I was at the credit union setting up my very first checking account so I could deposit my first paycheck. Yay for adulting! There was a lot of traffic on the way to work as well, and I had to stop at the county library so I could use their bathroom to change into my work clothes.

Once I arrived at McDonalds, I had to maneuver my way through the crowds of customers and clock in at the register while explaining to my shift manager why I was late. The second I clocked on I went straight to work, taking orders from the customers, cleaning the milkshake machine, washing trays and even serving orders. My first hour of work flew by so fast that it felt like I was only there for five minutes.

I know, I know, get to the good part Cristina! Hang in there, guys, I’m setting the scene. 😉 I’m female, this is what we do!

Things finally slowed down, and I started cleaning the trays that had piled up during the time I was taking orders. As I was washing each of the trays, I looked over at my fellow coworkers who were now just standing around talking to another coworker that I had never seen before. It was hard to tell if he was a new worker or not because he seemed to be chatting with the others as if he had known them all along.

I couldn’t help but notice just how cute this guy was, especially since he was wearing glasses (I have a thing for guys who wear glasses). He had a mop-top of shiny blonde hair and ocean blue eyes.

After awhile of chatting he came over to my register and ordered two double cheeseburgers with no pickles and extra onion. Being as it was my second week of work and I was still getting used to the register; I had a little bit of issues punching the order in to which this boy thought amusing. I don’t know what came over me, but I decided to be brave and just flat out introduce myself. The boy introduced himself back as Joshua.

I would love to tell you that the next couple months were a whirlwind romance full of love and adventure and from then on we lived happily ever after. BUT this is real life, and it was high school no less, so naturally drama. Okay I exaggerate, not really drama. It was more of an emotional rollercoaster for me because let’s be real for a second: I had a lot of insecurities.

For the next two months, Joshua chased after me trying to win my affection. One day I would be madly infatuated with him and on others I would be questioning myself on whether I really did like him or if it was the attention that I liked. After all, he’d come visit me on days that I was working and he wasn’t, we would text message each other on our cell phones all day during school (note to producers: please interview my friend Abby when writing the screenplay of my life – she’s got some stories on this), and we’d talk endlessly over Instant Messenger.

I’m telling you, this is romcom material right here. Can you FEEL the feelings?

About a week or so before we started dating I was invited over for family dinner at his house. There was a play coming up at my school that I could get extra credit for, so I invited Joshua to go with me. His parents decided they wanted to meet me first before they gave him the okay. You know, make sure I wasn’t a psycho like his last girlfriends. Ha ha. Joke.

Joshua and his brother Bobby were adopted into a family of six kids, which made a grand total of nine people that I had to impress that night. Technically it was eight because his oldest brother was living in Southern California at the time. But you get the idea! Just imagine it – sitting at the dinner table surrounded by two parents, six siblings, and one nervous/love-struck future husband. Good times!

Joshua’s youngest sister Tiffany was four years old at the time, and after dinner she brought out all her Barbie dolls and her Disney Princess sleeping bag for me to see. Then she said to me, “When you and Josh get married I will be the flower girl at your wedding.” 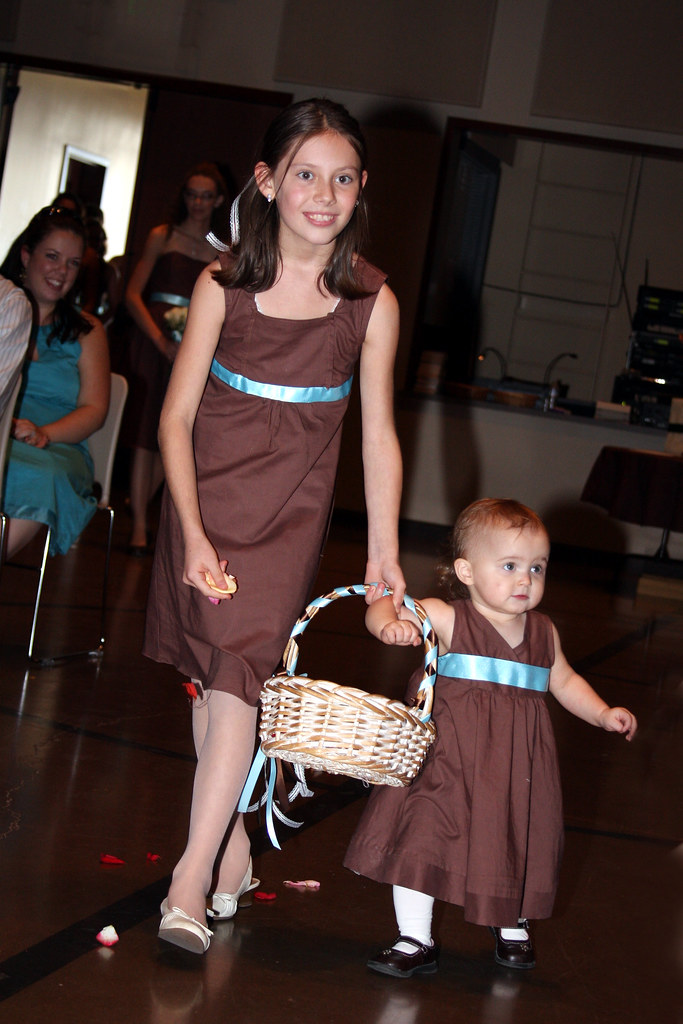 Now that I got the stamp of approval from Joshua’s family, it was time for him to meet my parents. Before the play, he came over to my house and had dinner with my family and I.

I’ve noticed with my dad that when I’ve brought boys home in the past he brings up two subjects: sports and cars. It’s like he tries to see how well they know one or both.

The last boy I brought home knew nothing about cars, but was big into football; he and my dad were able to talk football, but I could tell my dad wasn’t too impressed. I think at the very least he was hoping that a guy would know how to do basic maintenance on a car – you know that whole “taking care of my daughter” type thing.

When he brought these two topics up with Joshua, the fact that he could talk cars seemed to impress him to the point where I don’t think he minded that Joshua was not into sports at all (one of the many reasons I like him). I remember Joshua and my dad talking about cars quite a bit during dinner. It was nice to see them getting along.

After dinner we headed over to my high school to see the drama department’s production of One Flew Over the Cuckoo’s Nest.

Sidenote: before all this happened with Joshua, I came into my senior year of high school after having a very rough junior year and summer. Long story short, three guys I had a crush on rejected me and one gal was bullying me online (she got a couple people at my school to join in too).

I share this with you because God certainly has a sense of humor. I’m telling you, my story is what movies are made of.

Back to the play… Joshua and I walk into the theater holding hands. As we walk in I see two of the three guys that rejected me and the gal that was bullying me with her friends all staring at me wondering who my gentleman companion could be.

Let me tell you, nothing was more satisfying than walking down the stairs into the theater with those particular people watching me hold hands with my handsome mystery man.

Yes, Cristina is fully capable of landing herself a man. #sorrynotsorry

Fast forward to intermission, Joshua and I go for a walk around the front of the school. Then we stopped and just stood there hugging. All of a sudden he says to me, “This is going to sound silly, but Cristina will you go out with me?” I smiled, hugged him and replied, “I thought you’d never ask! Yes I will go out with you!” And then we walked back to the theatre as boyfriend and girlfriend.

2004, our first photo together taken on my teeny-tiny cell phone. 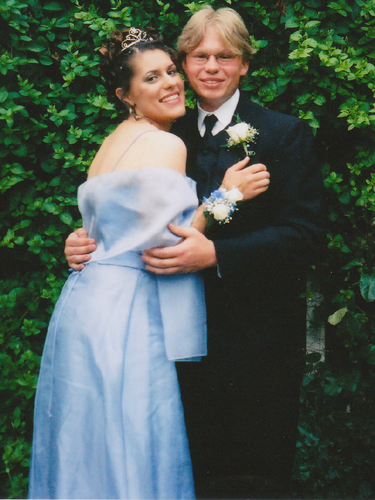 So there you have it! The rest they say is history!