Our master bathroom got a semi-remodel in April which forced me to clear it out while it was being worked on. When it was time to put stuff back in, I had the chance to purge a few things. Then I stumbled across IHeart Organizing where the April Challenge was to purge around the house, so off I went on an organizing and purge frenzy! Basically, the purging I did was ALL inspired by IHeart Organizing!

I purged my make-up stash, big time! Even though this is only what I use on a regular basis, I still had a lot of extra stuff in my case. For example M.A.C. has this recycling deal with their lipsticks where you save six empty tubes and get one new free, so naturally I have a few empty tubes hanging around. I also had a bunch of hair stuff, make-up reference cards from Allure Magazine, etc. that I ended up getting rid of. To this much smaller and compact case – Caboodles “It” Bag in Sassy: Because I downsized my case, I needed to get some smaller brushes that would fit, which worked out in my favor because my make-up brushes were way overdue to be replaced. Sonia Kashuk has a Deluxe Travel Brush Kit which had all the tools I needed in the correct size for my Caboodle.

Several months ago we did something a lot of people frown upon: we moved our TV into the bedroom (don’t judge, we have our reasons, LOL). Since the TV takes up majority of the space on our dresser, my tray that was once organized has turned into a drop-off zone for random stuff. Upon organizing and clearing up the stuff on the tray, I realized what was left didn’t need to be on the tray, as in my 7 tubes of Burt’s Bees chapstick. My nail polish went in my nail kit (currently living in the linen closet), the hand lotion and body mist went in the bathroom, the expired sunscreen and spa brochure went in the garbage, the hair clips, comb, and oil burner went in a donation bag, the Disney luggage tag was added to “to be scrapbooked” pile, and my pedometer and Colgate wisps were moved to one of the entryway baskets. 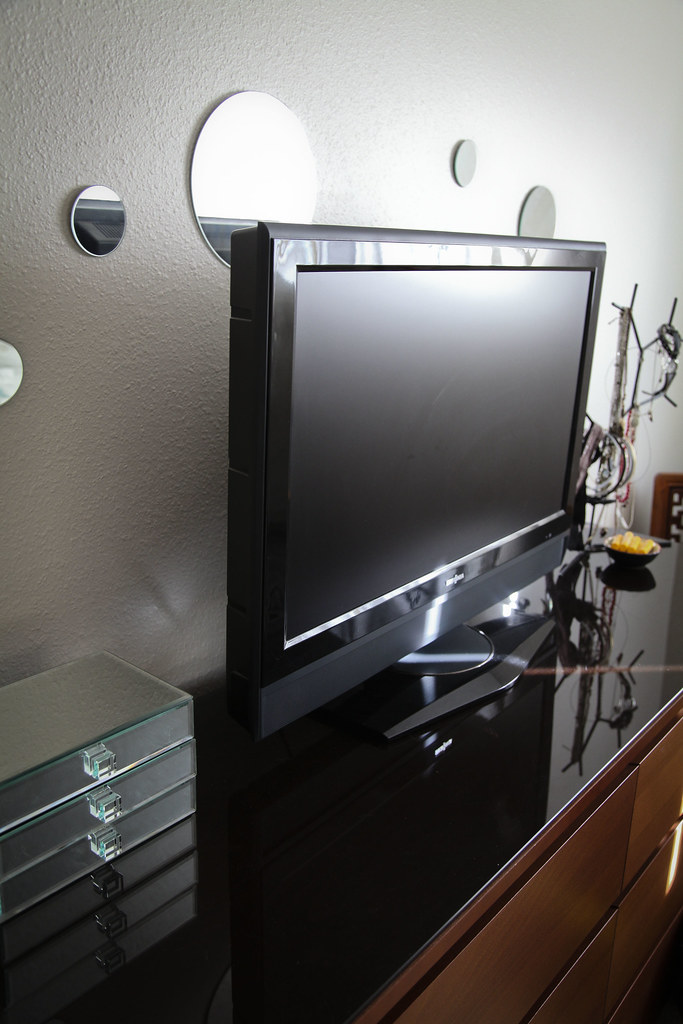 While purging kitchen stuff, I came across this little bowl that came in a food gift pack and decided to use it to hold my chapstick. I tend to lose my chapstick quite often, whether it’s in the wash or just disappears, which is why I have so many. The little ceramic owl I got on clearance at Urban Outfitters became a holder for my earplugs and now lives on my nightstand. My kitties love to eat my earplugs, so this keeps their paws off them! 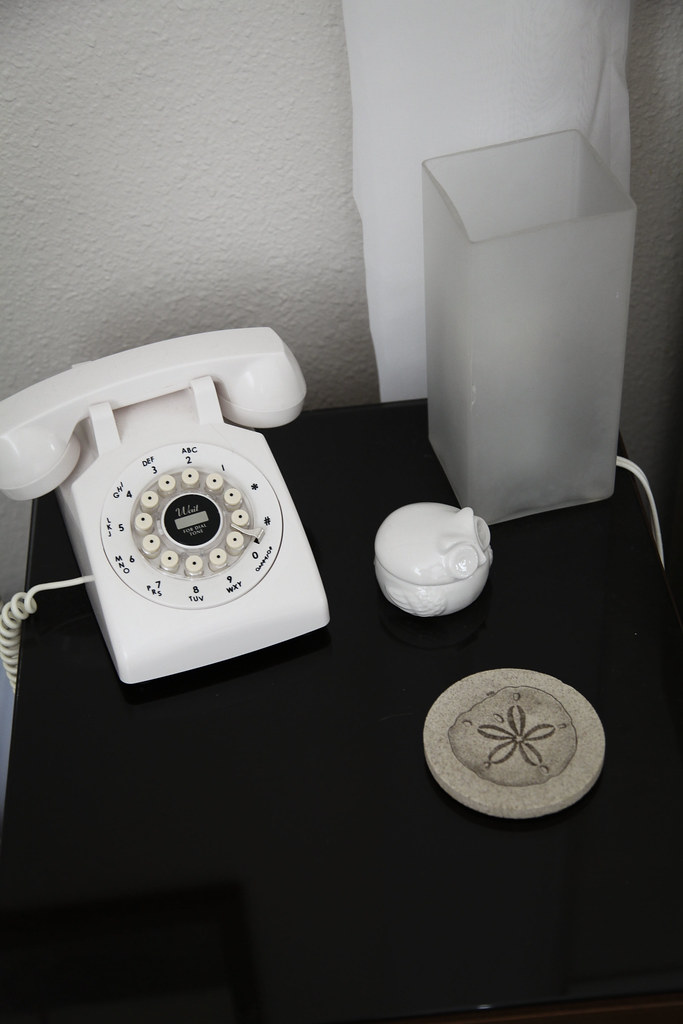 And what happened to the tray? It’s now living in the guest room! I developed a habit of storing my magazines on the nightstand in the guest room thinking my guests would read them rather than immediately recycling them once I was done with them. I guess I have a hard time just tossing away a new magazine after I read it (even though it goes into the recycling bin), especially if I don’t end up tearing out any articles or I look at it once. This has led to piles of magazines in the guest room, which I’ve discovered none of my guests look at, and random piles throughout the house. I have done two things to ease my magazine guilt. First and foremost, I took the piles of magazines out of the guest room and put them straight into the recycle bin, forcing myself to just get over it. Second, I got a small magazine holder for the bathroom where I put the latest edition of each magazine after I’ve read it until I get a new one to replace it. That way I feel like I’m getting more use out of the magazine because lets face it, stuff gets read when you’re on the potty. And yes, I have the books What’s Your Poo Telling You? and What’s My Pee Telling Me? in the magazine holder as well!

With me getting an iPad not too long ago, I found that 3 of the 5 magazines I subscribe to have iPad apps, so I’ve decided to ditch the hard copy for a digital one. The two magazines that don’t have iPad apps, Real Simple and Weight Watchers, I get adequate use of because I hand off Real Simple to my sis in-law when I’m done, and with Weight Watchers, I rip out the majority of their recipes. Inspired by Jen’s method of organizing discs, I chose to work on my CDs and DVDs. I had been meaning to develop a better system of organizing for a LONG time, mainly because over the years my discs have become back-up since I keep everything in digital form. Not only that, but I don’t even display my movies/CDs other than the special box sets like Star Wars, Lord of the Rings, and Sex & the City. I use a nifty app called Compartments, so I was able to take inventory of all the music and movies I have, automatically putting them in alphabetical order. Then I went through all my media that I hadn’t backed up from iTunes yet.

I actually had a really hard time parting with some of the CD booklets/inserts. It felt like I was throwing away a piece of my childhood, but I had to remind myself why I was doing this in the first place: the fact that the only time I have touched my discs in the last few years was packing and unpacking them during moves. I needed to let this stuff go. After all was said and done, I ended up with six acrylic disc boxes, using two for music, three for movies, and one for TV shows, and 2 huge garbage bags full of CD/DVD cases. Those two bags filled up my entire recycling bin for the week. Inspired by Jen’s filing project, I purged a lot of papers. Since I also put together my own household binder I was able to take certain papers and put them in the binder as opposed to keeping them in the filing cabinet. I also purged a lot of art-related supplies. After my grandma died last year and we were going through stuff in my grandparents house, I stumbled across my grandma’s paint and art supplies. I took them with me and never really went through them until recently. Sadly she had a lot of old dried up paint supplies that were garbage. Luckily she did have some useful stuff, but at least I was able to purge what was necessary. 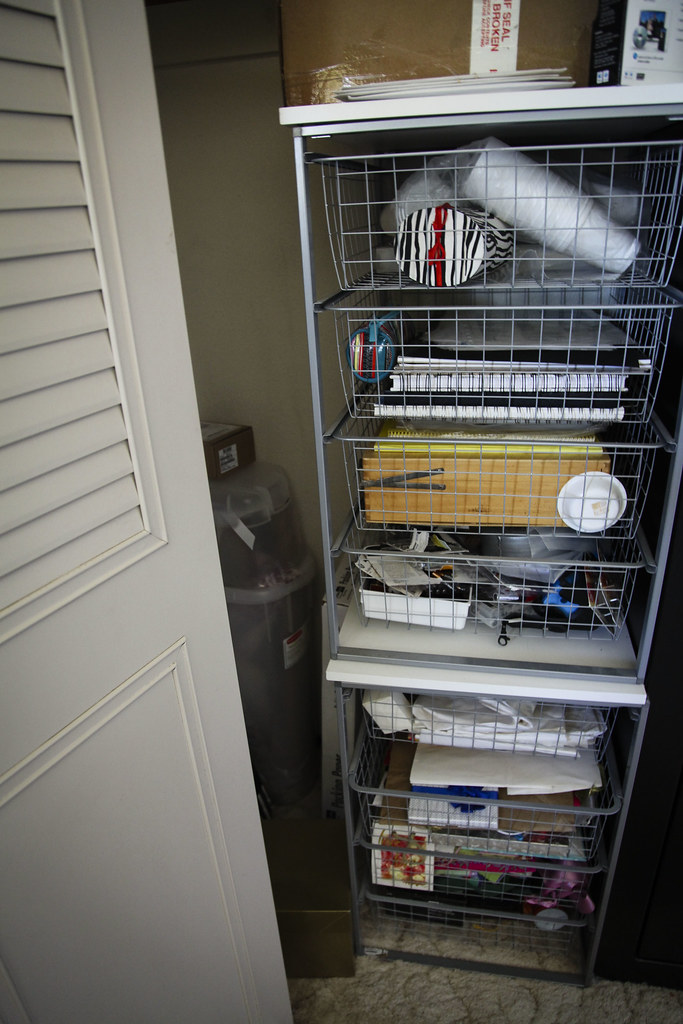 Since I was purging disc cases in the living room, I decided to purge cases for my computer-related discs as well. I have to turn things in on discs a lot for school, therefore I had a ton of white disc envelopes hanging around (not enough for all my music and movies though, hah). I decided to put all my discs in the envelopes keeping everything uniform and clean. Also, when the discs were in their different bulky cases, they filled up the entire basket. Now, the basket is half-full. 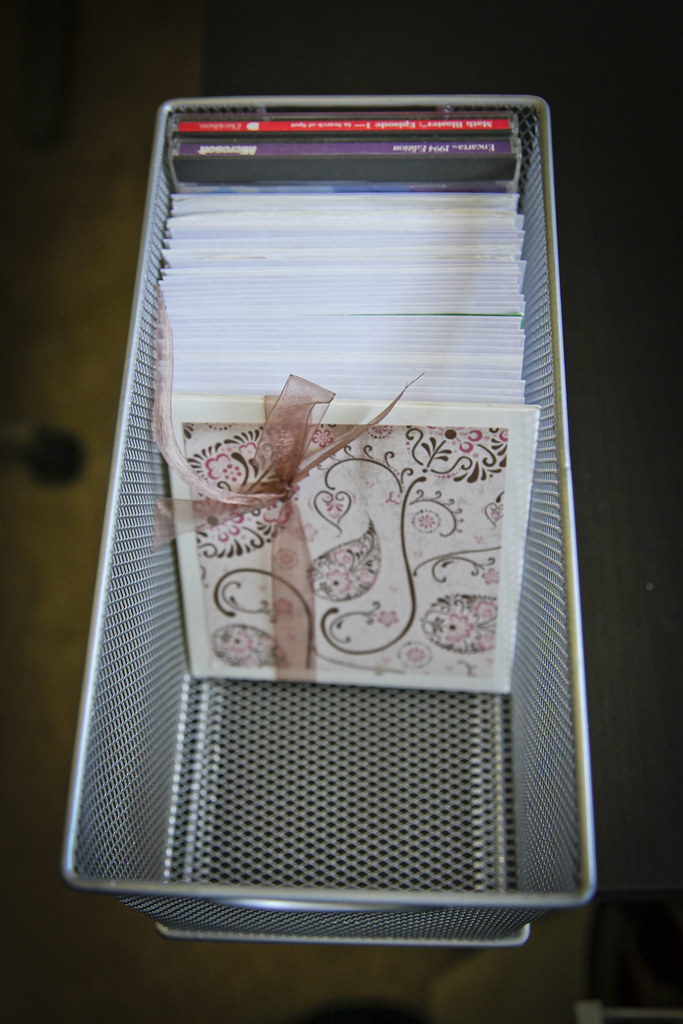 After reading Jen’s post about her kitchen, I purged my cupboards of the majority of my old plastic tupperware containers and replaced them with Crate & Barrel’s Set of 12 Storage Bowls With Clear Lid. I got a few smaller glass ones from Bed, Bath, and Beyond as well. I also bid my veggie keepers goodbye since they took up way too much room in my fridge, and hello to Debbie Meyer’s green bags!

I tried the experiment of putting things you intend to purge but aren’t quite sure if you’re ready to let go of in a box and see what you forget about. It was good for me because I had several spatulas and serving spoons that I really needed to get rid of, as well as some other random kitchenware that hasn’t gotten any use. That’s the downside of inheriting stuff from deceased grandmothers: you get a bunch of stuff that you think you need but never end up using. Various donation places send us cards (sometimes a bag) in the mail saying something along the lines of, “Hey we need XYZ to donate to ABC organization. We’ll be in your neighborhood on such-and-such date.” All I have to do is bag up on my donations, put them out on the curb with the donation card on the date they specify, and then a truck will come by, pick my stuff up, and leave me a receipt. It makes getting rid of stuff so easy!

Wow!!! Your purge is amazing!!! Peter and I recently did a spring cleaning of the house and we also got rid of a whole bunch of stuff. The church that my mom and grandma go to always has a garage sale at the beginning of June and so we have everything boxed up and sitting in a corner of the living room. We can’t bring it to the church until the week before the garage sale. But hey, I know the stuff will be gone soon and so I’m happy!

It always feels so nice to have a clean and organized home. Clutter is BAD. I wish I was as coordinated as you are, but hey, I can’t have everything LOL.

I have been seriously thinking about getting rid of my cds. I honestly haven’t looked at them in YEARS. I usually end up just putting them onto my iTunes and never touching them again. Since I buy most of my music off the iTunes store, I actually haven’t bought an actual cd in years. I really like the way you organized your cds!! I thought about just giving the cds away, but then what if I lose the files off my computer. So I might just give your method of organizing a try!! That way it will be less cluttered, but I still have my back up cds. YAY

Cristina, you are my hero LOL 🙂